Yay, science writing about our data :)

I just wanted to share the happy news that a report got written about our eterna lab data.

Basically it is a great introduction to SHAPE data and the technique behind. Plus the idea behind Mutation & Map gets explained too. It is understandable compared to the average RNA paper - ignoring all the formulas.

If in trouble, just jump what you don’t understand and focus on what you understand.

What makes EteRNA special is the source of the numerous sequence designs. All sequences were designed manually by a community of thousands of nonexperts, who build sequences in form of a game according to their own personal developed design rules. Those rules are of purely individual (e.g. heuristic) nature. (page 22)

I very much liked this fine illustration and explanation of loops. 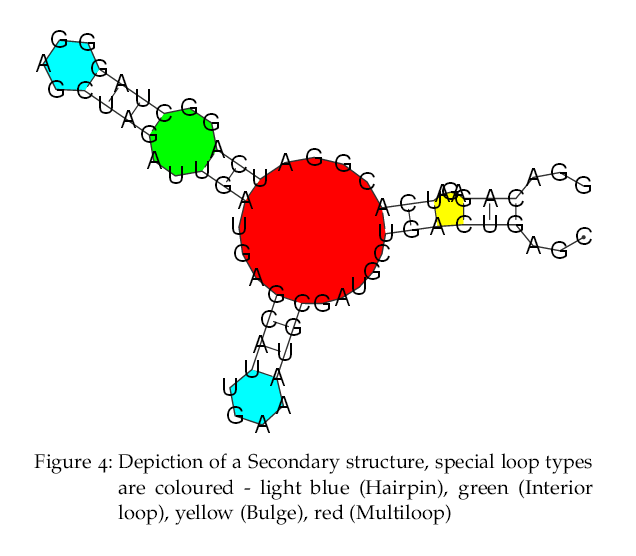 Kinetic barriers gets explained. Its a way to simulate if an RNA design gets stuck in a fold too long to get unstuck. Basically it is kind of the needles eye that the RNA needs to get through, to fold correct. Alan Robot wrote about it: II: free energy and kinetic barriers and Nando has as well: Conformational 5.

Some eterna players use it when designing. I played with the barriers server when I was new in eterna. But quickly dumped it since running a design through it, at least then, could take like 1⁄2 hour. Plus I could often make good designs without.

Now Roman tested the idea if the winners would always be found with the Barriers tool, which had kind of been the current thinking and he found that this was not always the case. Among the high scoring designs were designs that would have been deemed bad, viewed through barriers. I’m smiling at the thought that some of these “offending” designs likely are mine. I really like that our odd winners may help science understand better where the current models fail.

Sum up of thesis: Its an investigation into areas where the current models RNA algorithms and way of reading SHAPE data are not fitting with the data themselves, and pointers to areas of interest for further studies.

Thumbs up to Roman Wilhelm Ochsenreiter!

May your work and our data along with it be included in coming algorithms.