After creating the EteRNA Quad Energy Table a while back, I began to do some reading about RNA, and was interested to discover the importance of trios of bases and pairs. These sets of three are often referred to as either “Codons”, or “Trinucleotides.”

I was struck because, as I began to realize, every time we change any base to another, or anytime we flip a pair, we are affecting not one, but two “Quads.” The base or pair that we have altered is the common pair in both Quads. These two Quads together form a Three-Pair Unit; or a Trinucleotide," consisting of 6 bases.

So I then became interested to see what the logical extension of my previous “Quad Energy Table” would look like if expanded to show “Codons,”, or “Trinucleotides.”

It turns out there are fully 216 (6^3) different, unique “Codons” possible to construct in EteRNA. So I created a similar table displaying all the possible Trinucleotide combinations, sorted (like the Quad Energy Table) in order of overall Decreasing Energy. The table also includes the individual energies of the two Quads which, together, form the Codon.

Although a bit large and unwieldy, I was able to shrink the table down small enough to post here… I think. (hope this works) 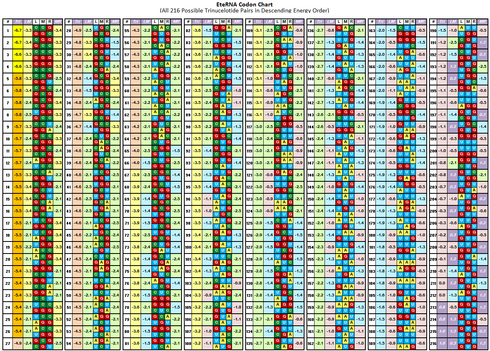 I plan to follow this later with another version sorted differently; in a modified binary order with the least significant (most often changing) pair in the center, and the two outer pairs being the ones incremented more gradually (the more significant binary place-holders); this for the purpose of facilitating easy look-ups of a certain sequence, and to easily see in one 6-row section, all the possible Codons and associated energies given a particular set of outside neighboring pairs.

Not sure how useful this will be to the average player, but for those of us who are either incurable nerds, hopelessly demented, afflicted with OCD, criminally insane, or just plain “weird,” it might hold some passing interest value.

(Click on the Table for a larger, clearer version)

d9, this looks good because you are absolutely right about the trinucleotide approach. But if I may make two suggestions, first is make the table higher resolution and the also sort is similarly to the genetic code table so looking up a specific trinucleotide would be easier.

Thanks for the validation of approach

…will put new sort version up as soon as I can. However, not sure about whether I can improve the resolution much - I have to keep the size down to what will fit on 12" laptop screen for screenshot. - But I will try; I appreciate the feedback!

Very nice – you could also post an Excel document so we could sort it however we wanted?

Because of the peculiar construction of this spreadsheet, (with merged cells spanning half-sized rows for the nucleotides), the sheet is not readily or easily sortable just now. I am planning an update to fix that, using graphics straight out of the game that include the whole pair as a unit, and so will not conflict with the merged cells, and will be something anyone can sort easily.