OK, so I’m trying to work on Brourd’s paper lab with FNM mimics. I can see the point of a mimic like CCUAUC–GAAGG which leaves the part of the sequence that binds in both the switched (bound) and unswitched (unbound) forms the same and only changes the part that will be unbound in the unswitched form as that will allow a proxy for both shapes at similar energies in the mimic case. 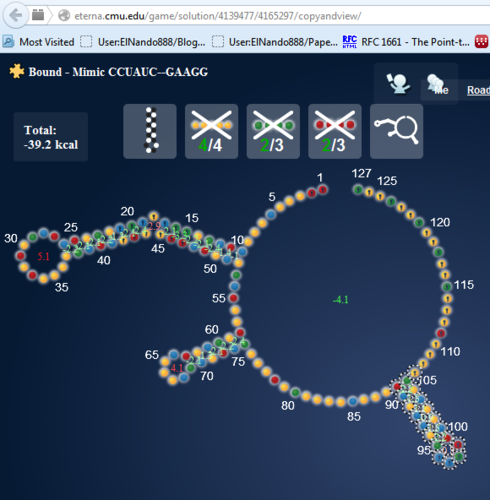 But what is the logic behind a mimic that alters the part of the aptamer loop that would be bound in the unswitched case – as that is changing the energy of the unswitched form as well? Do you need to make further energy compensating alterations?

So, the candidates you linked were actually from the first pilot lab of the FMN Mimics.

i had originally developed, oh, 20 or so mimic sequences that I felt could potentially work. However, Nando pointed out several factors that led towards the current protocol:

With these factors in mind, the decision was made to code an algorithm for the rating of mimics, and the generation of mimics, that would allow for a total net FE bonus based on mutations made to the secondary structure of both the OFF and ON state.

It is important to note, that this is simply the beginning. An important part of our plan is to run sequences from EteRNA Round 70, aka Cloud lab switches, and compare the SHAPE signals of those RNA against those of the mimics. Using this data, we plan on refining the evaluation scripts, as well as the factors involved in scoring a mimic and the weight of each of those factors.

For example, we may determine that mutations to currently existing base pars in the OFF state are far more detrimental than anticipated, and as such, we may weigh the preservation of the secondary structure of the OFF state far higher.