I'd like to see some of the leading solutions for most GU's!

I can get close to the top on some, on others I just look in awe at the number of GUs, and would like some hints how they got there! Thanx.

I’m in the same boat. Have any in mind? I’ll show you mine if you show me yours [I’m talking about tips and tricks, not entire puzzles]

Here’s a random tip involving Gs and Us:
If you need to make a hexagon that the tutorial calls a “2-2 loop,” do this:
GGUU
UUGG
If you do it in the right order, the loop gets something like a -2 kCal free energy, which is excellent. I discovered it when it often formed against my will during my first learning experiences with G’s and U’s.

I’m not sure I have any tricks, that’s the problem!

I have a basic algorithm I use from the start, that does a great job on most with minimal random fiddling (well, it’s random if I havent figure out the details yet, but of course what I don’t know is what the state of the art is on any of these things!). That might get me past the solution criterion, but only halfway to the contest max. Especially when getting to the last ten percent or so, it seems to me to be just combinatoric fiddling, and I usually get bored with several places for improvement still starting at me.

But, for example, my algorithm does not generate the gguu/uugg pattern you describe, if I understand it correctly, and 99% of the time I’ve tried to add more u’s to get towards that pattern, it has not worked for me. So either my starting point is different, or I don’t really grok the suggestion.

So, I’d still like to see a couple of whole solutions.

Here’s the “trick” I was referring to: 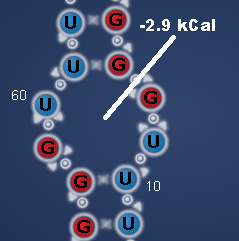 Make sure you do it in the correct orientation, or it isn’t as awesome [the mirror image of this picture won’t have such a good energy bonus].

I’m pretty sure showing off whole solutions would be a very bad idea. Slowly learning tricks is much better, because if you are forced to learn them on your own, you may develop tricks that the “experts” don’t know yet. When you run into an expert and talk to them about it, you can then share your tricks and maybe they will combine into something awesome?

I’m not totally sure I believe what I’m saying. It is just a game after all. But showing complete solutions would definitely have bad repercussions from the point of view of game design.

Thanks, I will need to try that.

It conflicts with a new “trick” I thought I had learned, for larger structures, that changing yellow to red on big loops tends to stabilize adjacent stacks without or above what putting in a GC does.

Yup, this is a very specific trick where your general trick is … more generally true.

The general framework to fit my trick into is this: when your RNA stubbornly folds in a way that you wish it didn’t, think about it the opposite way: someday you will want your RNA to fold that way. Can you remember for the future how to cause that shape?

In GU competitions you quickly learn that alternating GU with UG makes things stubbornly come apart in a predictable fashion… instead of just learning “don’t alternate GU with UG,” you can learn “alternating GU with UG causes a specific shape,” and when you want that shape, you can make that “mistake” on purpose to cause the shape.

I just want to add a couple links to this thread, since I refer people to it from chat sometimes.

Both have helped me a lot in GU competitions:

Yeah, this is a great trick cccc. . . what it does is converts the positive free energy penalty (=unfavorable) for an alternating GU stack into a negative one (=favorable) for making a 2x2 internal loop (the sign flips because now you WANT the stack to fall apart, not stay together, reversing the direction of the free energy equation). It only works one way and not the other because there is a " dangling end stacking" bonus for G’s in the energy function that only works on either the 3’ or 5’ end of a helix, but not both. . .

A 1-1 loop trick that’s helped me in GU challenges.

The orientation of the AU pairs is important to keep the configuration stable. It seems to get around the GU-UG weakness. But unfortunately it appears to only be effective in longer stacks that give you enough space to put it in.

Love people who can’t take criticism. This chaendry comment is only good for the long upsidedown L Gu Challenge.

Thanks Joshua, as usual your insight is enlightening. I removed the comment when I realised it would be interpreted incorrectly. *shrugs* We all have our moments.