Could someone please post a puzzle of a part of Prevotella Albensis?
If we could get that partial puzzle stable (especially the pair in red) then we could use it as a starting point for the complete Prevotella. 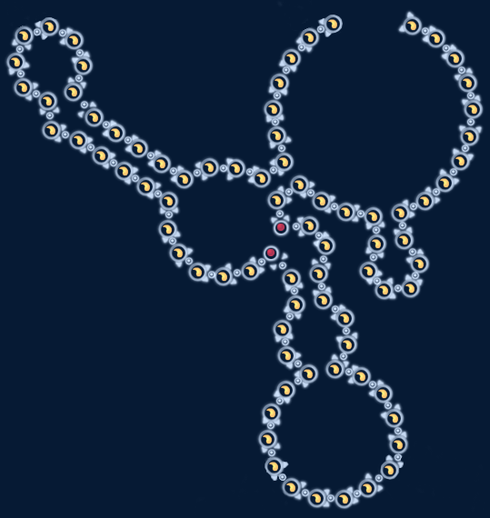 The dev team is reviewing this puzzle. We will let you know the outcome. 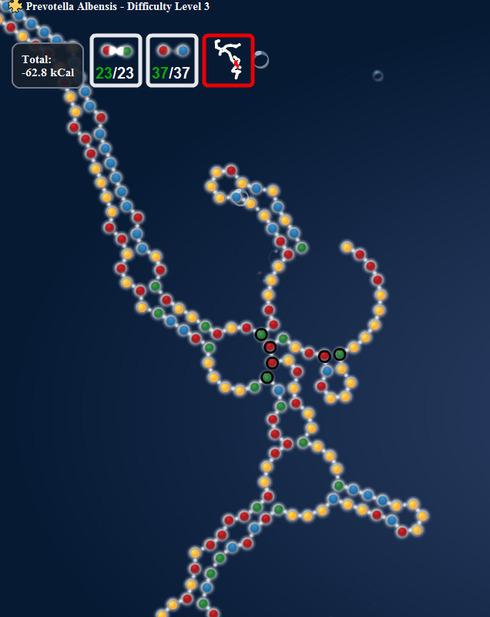 Well, no matter what I do I end up breaking basepairs at the marked places. I have tried loop energy optimisation and whatnot.

Is it possible to solve this one?
Have the devs managed to fold this one correctly - ever?

I’m sure it must be som loop optimisation that eventually will make it solvable, if it can be solved.

I forgot to show the state where the basepair you wanted to fuse are sticking together.

I have put the pattern mode to the left and the natural mode to the right in the image below. 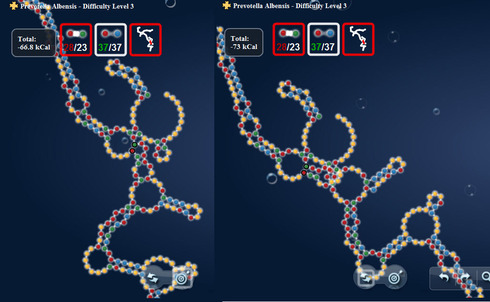 But I’m unable to make the other marked basepairs (in the image in my previous post) stick together. It would be nice if the one who solves this one could post an image where the whole region is stable, either here or by e-mail

None of the highest ranking players have managed to fold this one yet.

Maybe the folding algorithm has flaws that makes the energy configuration in the problem area wrong?

I think that most of us holding ranks in the top 50 know the effect of stabilizing loops (and 0 players have solved even the Level 0), but my questions were:

I realized level 3 of Symbiotic plasmid is 1 nucleotid longer (the first one) than the other levels. Maybe something similar happened to Prevotella?

I have asked whether the devs have tested that it is possible to fold P.Albensis but they ignore the question. Recently the problem section of that RNA was released as a separate puzzle. I will not try this puzzle further unless the devs confirm that it is solvable after having folded it correctly themselves, or some of you fellow puzzle-solvers manage to solve any of the P.Albensis puzzles. Why bother?

I tried the partial, no better than the whole, still doesn’t solve, and I see nobody else has solved it either after a day or so.

You’d think at least one person would have stumbled upon the solution by now if there was one, wouldn’t you?

I am fairly new here, and when I mentioned I was attempting this one, I was advised by some of the top players that this one was impossible and to only give it an hour of thought before moving on.

With about that time I have managed to get to to the point of only 1 pair not quite right (as I am sure others also have) but thought I would post it here since the currently posted diagrams aren’t quite that close. (and to hopefully prompt further feedback from the dev team) 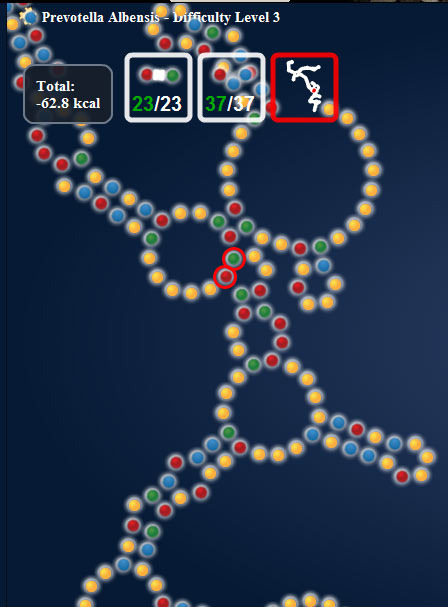 If you simplify it to the problem area, the loop (starting at 7)'s size makes the pairs at (5,21),(6,20), and (14,19) mutually unstable. I didn’t explore too much so a few other factors could make those pairs unstable as well, but the shape was able to be stabilized with a 5 nucleotide loop.

Maybe as a stepwise process, we can compete for the lowest energy difference between the natural and target modes. I have it down to 4.3kcal. If no-one has better I’ll post some of my sequence here