Permutation optimation tool light (or how to begin puzzle solving)

I was inspired by Mat and Brouds recent discussion about Mat’s idea Eterna task 463 with having a permutation tool to ease the more repetitative part of puzzle solving.

That made me think of the way I solve puzzles. I usually pick option blue nucleotide, and then zigzag through the whole puzzle, to save time and not have to swap side

I think this can be made into a simple algorithm that autofill any puzzle with AU-pairs. I would want it to do exactly what I do, as I fill out following a specific order.

It won’t solve the puzzles in itself, just relieve the burden of puzzlesolving. As Brourd suggested, it should be locked to new players and in Mats words be a reward, for players who knows how to do a puzzle.

My version of this idea is not a permutation optimation tool. But then too, it shouldn’t use up much computer resources and would be much easier to make for the crew than the original idea.

I usually start at the starting point of the puzzle or a loop:

Then when I fill in GC-pairs I can always twist a few AU pairs in the middle of the string, where needed.

Here is a visual demonstration of what I do. The example is done with my puzzle Permutation tool test: 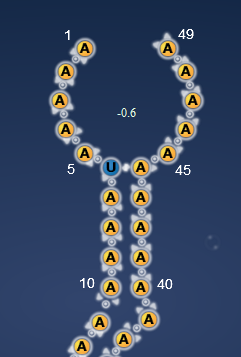 Not like this - go for the highest possible value of negative energy in the hook or puzzle starting point, that will make this part stronger and more likely to stay together. I generally just start with the blue nucleotide to the left: 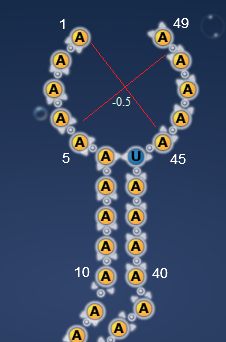 Step 2: Then I switch side 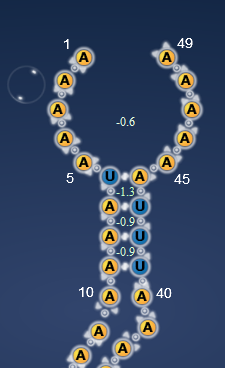 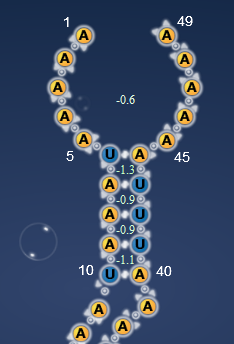 Step 4: And so on, till all the puzzle is filled with AU-pairs like this 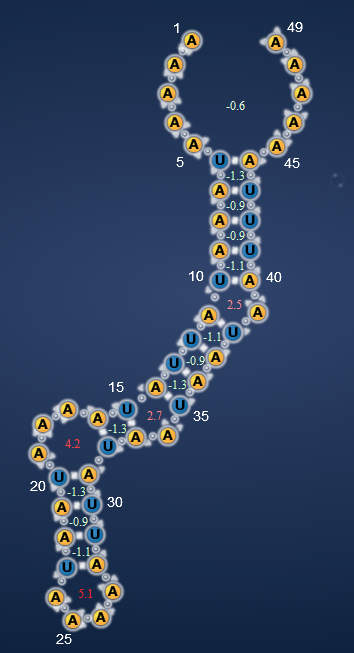 This way of beginning solving a puzzle, I have made a habit almost from my start in Eterna. So far I have solved all challenge puzzles (considered solvable). Not to brag - just a little

- but more to underline that this strategy is working. Now you have one of my brain’s algorithms.

I think it’s a good idea and it would help to reduce the repetitive actions at the start of a puzzle.

Eli Fisker said: “It won’t solve the puzzles in itself, just relieve the burden of puzzlesolving. As Brourd suggested, it should be locked to new players and in Mats words be a reward, for players who knows how to do a puzzle.”

I think this part is the most important. Then, as there is several ways to start solving a puzzle, I don’t know if it’s possible to choose an algorithm to do it automatically.

with this, but only make it after a certain amount of points; for e.a. 100.000 points… so the beginners will learn the “how-to’s”

I wonder whether something like this could be the doorway to scripts, if a given user has the option for a customized starting strategy feature. Personally I don’t want every stack to look like it has the same orientation pattern as every other stack at the start of a puzzle, and I would end up fiddling with it until probably just clearing the puzzle and starting anew. But I think it’s a great idea to add this feature especially to reduce the ungodly amount of time it takes to mutate bases into many large puzzles.

Lots of complaints have come into the chat from people who are getting tired of the bore in mutating all the bases in a large puzzle just to begin it. This kind of feature would keep interest up I think

And as long as we are wishing, I think it too would be neat if we could choose from among a few starting strategies at will while solving a puzzle. Eg. Maybe I could try Brourd’s starting strategy, and then Eli’s, and see which I would prefer to start with for that particular puzzle. Eli has a few peoples simple starting strategies on paper that could be used as a template

I would like to make a suggestion.
When on add pair, AU, GC, whatever.

A right click would make an alternating chain instead.
AUAU
UAUA

This would allow an alternating fill pattern without disrupting the existing interface.

Agreed it shouldn’t be available at first, but I was certainly ready for it by 50k points. By then you’re into some larger puzzles and it gets really repetitive.

I generally start by painting one side of every stack blue (usually the outside of bends), then I go about flipping tops and sometimes bottoms of the stacks until things start turning white. This to say I’d prefer to set some options (select tick boxes) for how the starter script would work:

You could keep going of course – sometimes I find it’s useful to turn a lot of top/bottom stacks to red/green just to stick things down before trying to figure where to eliminate those pairs. My expanded wish list would be:

Point is the same as Eli’s though, that it would be nice to be able to automate the first steps of a puzzle rather than having to start all yellow each time. Breaking it down into options for left/right and top/bottom pairs – things that are simple to explain – could help give us that head start, avoiding some of the repetitive tasks before getting into the puzzle solving.

Anything else that would be simple to add as a “do to the whole puzzle” option? Even “boost all loops”? Or is that going too far?

What I think would be optimal is to be able to select from a list of Scripts that you have written and when you do that your mouse pointer has a distinctive icon (color?) and when you click on a base it performs the chosen script on that base. The operation might do something like Door has suggested above like traveling up the chain and changing bases in an alternating pattern or some other kind of operation that you or someone else has written.

Another related idea is that if I complete Listeria lv1 for example, then go start Listeria lv2, I should be able to import my answer from the first one and save all that time. And on the flip side, it’s really depressing to complete level 4 of one of the huge puzzles, and then have to repeat the whole process for level 3, 2, 1, 0. I’m not learning anything on those subsequent solves, it’s just data entry made annoying by how the puzzle locks up after every move.

I see now there’s already a thread about that idea. Looks like it’s been dead for a year now, though. >.

Good idea, but I think that Flash does not allow you to capture right clicks - if memory serve me right.

Perhaps a “shift” or “control” while click - holding one would cause whatever pair to alternate.