So the idea is that Open TB labs are 4 separate simultaneous puzzles which we currently solve with NuPack as a multi hybrid RNA problem. If we treat the problem of each state as one puzzle, we can simulate the simulation in puzzlemaker.

Manually I can check all 12 solutions for the 4 state Open TB lab in the time NuPack takes to iterate once in the lab. I can see essentially identical shapes for solves and how they react much, much faster. And I can see potentially different folds and energies unobtainable in Open TB. Once I have something that looks useful I can go to NuPack in the Open TB lab and verify, if I choose, that the simulation of the simulation is accurate enough for submission.

A script should be able do do this, but it is workable manually too. And saves huge amounts of time and adds potentially useful energy and shape information. Since good surrogates can easily be built just as for the lab itself this may be a useful way to increase output of submissions.

Fixed shape or floating native state can be used, either one in the Puzzlemaker while designing for the Open TB labs. 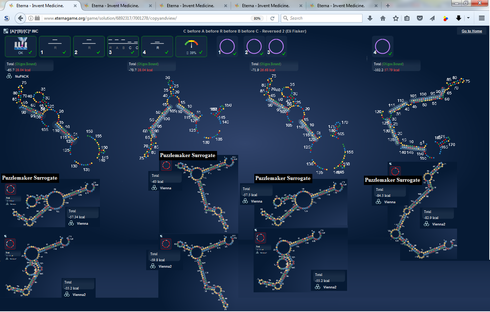 I’m not very familiar with puzzlemaker.  It lets you make a “long” sequence? Longer than 85 bases? It looks like you have put the oligo’s as locked bases buffered with A’s as needed?  A little hard to see on this screen.  This would be wonderful for players to get introduced to labs without enduring the lab process.  Tell me more about the design process.  Can you make an original lab solve into a puzzle that will turn the icon all white when you duplicate the sequence of the lab solution? If so, it looks like it’s “game on”

Hmmm, I don’t see my comment so I’ll try again as a reply.

Click the picture to go to new tab/window and see with clarity.

Yes, you can get white target display. In the example above I chose not to use it to show instead native folds.

Yes, I used A’s to buffer the gaps in the hybrid RNA of the Open TB lab I was simulating. U’s also work. Note often minor exceptions to original solve sequences will be needed as in my example above. The dangling U of one section had to be compensated to get exact shape mimicry, so I changed it to A. I could preserve the U by adding 2 other U’s across in a triangle too and so preserve shape mimicry.

I have several real lab examples made into puzzles for folks to solve.

Import lab solve directly from lab or copy sequence and input to puzzlemaker.

The current puzzle restriction is formally 400 nts (not necessarily bp if anyone was thinking that). Of course there is clearly a way around that restriction (coding trickery), but otherwise the limit is absolute for player-made puzzles.

I like the idea of being able to make lab-style puzzles. The current puzzle maker prohibits the use of oligomers/aptamers let alone manipulation of their concentration. It would be great to be able to do puzzles of this sort as it is great practice for the actual labs. As far as using a single RNA polymer to represent the two molecules, the number of As in between the two sequences is likely to need to be of a certain length so that the energies are in keeping with what they are in lab. As long as that is done, then I think this model works great. I might just experiment with it.