http://goo.gl/2kuej
I’m not sure what I’m missing, but it’s supposed to be “level 1” which makes the lack of completion particularly irritating. Thank you for your time.

The Guanine at base 41 is hurting you. Mutate that back to Adenine and consider mutating base 27 to Guanine instead as shown below. See page 14 in Brourd’s loop boosting guide 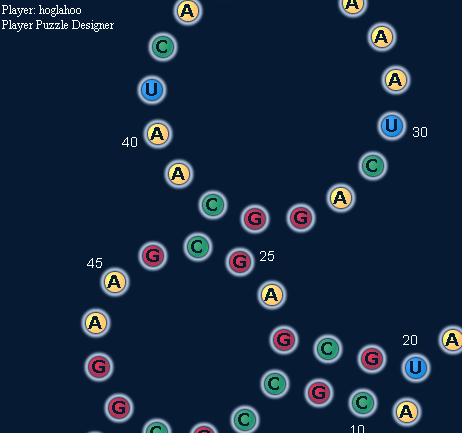 If you didn’t know, you can also take a screenshot of the game board by clicking the “camera” icon in the chat box, and it will give you an option to view the image, or even post it into the chat. One of the awesome things about EteRNA is that the experienced players are usually super helpful about helping people get out of binds.

Wow, rapid responses! I resorted to the Picasa screenshot because for some reason chat was not connecting at the time [Edit:(and still isn’t)]

The Brourd’s guide really helped, and it seemed like I was stumbling upon the bulk of the strategies.

G-41-A and A-27-G seemed like it would’ve worked, but it forced a re-arrangement. Flipping pairs in the vicinity of the loop did not help. I turned on the energy labeling to see what I was missing, and was able to drop the lower loop to 1.8 kcal, as well as realize the “original” G’s and U’s in the upper loop (past the adjacent positions) contributed nothing to the stability (and were subsequently returned to adenine).

Opposing G’s in the adjacent positions of the top loop dropped the energy down to 5.54 kcal, a 0.1 kcal improvement from having only G at 41, but I’m not sure if this is like a local minimum that’s obscuring the larger energy goal. Alternatively, for: A at 41, and G at 27, the loop energy is 4.54 kcal (but still an unstable configuration).

What the heck am I missing here?

Alternatively, based on mpd21’s loop guide: http://goo.gl/uhWgA
(fixes the upper loop, but the highlighted pair is unstable)

You might have to play with it a little. Trying G-C instead of A-U, swapping pairs, etc. The G in the upper hairpin loop is good. You don’t need the G at 44, but I did not load to the puzzle to see whether it is hurting you. Good luck!