Effect of Energy:
When considering energy, lower is generally better. There is a box which has the total energy (in kJ - kilojoules http://en.wikipedia.org/wiki/Kilojoules)

See this article about free energy as it applies to EteRNA: http://getsatisfaction.com/eternagame…

Basic Strategy
My strategy for solving the EteRNA challenge puzzles is as follows. This strategy should work for puzzles of all difficulty levels.

-Step 1:
Fill all stacks with AU pairs of random lengths of 1-3. There are several things to be aware of when doing this to pay attention to that will be discussed later in the advanced strategies section below.
-Step 2:
Replace AU pairs with GC pairs as needed to stabilize structure into desired shape. Use as many as needed to stabilize it REGARDLESS of the number of allowed GC pairs.
-Step 3:
Once the structure is stabilized, go through the GC pairs and remove as many as needed to get under the number (if applicable). This is generally the hardest part in the more difficult levels. One good and quick way to start is to change each of the GC pairs to GU pairs and see if it maintains the structure. This will quickly remove some of the extra GC pairs that were placed earlier.

Next, if you still need to reduce the number of GC bonds, what you can try is to change the GC pairs to AU pairs, which are the next strongest bonds. Be sure to try the AU pair in both orientation (i.e. AU and UA) because they are not always of equal strength.

-Step 4:
Start on one end of the molecule (or anywhere, it doesn’t matter) and change the A of EVERY AU pair into a G. Check to see if the structure is still in the target shape (ring around structure icon stays white). If it maintains the structure, keep it and move on. If not, undo (press Z key) and move on.

When placing the AU pairs in Step 1, there is several things to consider.
First: GU-UG stacks are not generally stable. Meaning the if the stack contains alternating GU stacks, it will probably not be stable
For example: The stack
N-N
G-U
U-G
N-N

Is generally not stable, where N stands for any nucleotide (although it is possible to stabilize it by changing the flanking nucleotides (N here)).

Thus, when you are placing the AU pairs in Step 1, having perfectly alternating AU pairs is not a wise strategy because it will limit the number of GU pairs you can place in Step 4. Therefore placing AU lengths closer to 3 or sometimes 4 may be better

In some puzzles there are some loops that can be particularly difficult to keep closed. For example, in the Saccharomyces Cerevisiae puzzle, the top most loop is often very difficult to solve. The loop is structured as a loop closed by a two pair stack

Putting two GC pairs in the stack is not sufficient to keep the loop closed. So the way to keep it closed is by modifying the nucleotides adjacent to the stack in the loops.

For example, in the Saccharomyces Cerevisiae puzzle, putting two G’s in positions adjacent to the loop, stabilizes the stack and keeps the loop closed.

This sort of technique is also applicable to other types of loops as well. If you are having problems getting loops to close, try changing some of the nucleotides in the loop to G and see if it helps the free energy.

If you are having trouble with loops, check out the Loops Guide:
http://getsatisfaction.com/eternagame…

I use exactly the same strategy - developed by trial and error. It would be good if we could see our solution after the fantastic winning display is finished. I often can’t remember exactly what I’ve done to win.

This is great – and it also prompted an interesting conversation on chat about how to make more difficult puzzles.

It would also be great if others posted their own strategies below!

Well the puzzles are too easy once you get the hang of it.

although I’m brand new (only playing a few hours), I already want to voice a STRONG second to mummiebrain’s idea above (" It would be good if we could see our solution after the fantastic winning display is finished. I often can’t remember exactly what I’ve done to win.") - I also would love to be able to study the finished configuration.

Also, kudo’s to Matt B. for the strategy guide.

I believe that this is being worked on. And thank you.

We updated the game so that you can “Stay” after you clear a puzzle. There you’ll be able to play with your cleared solution.

But after you left a cleared puzzle there is no way to see your cleared solution again, or is it?

@Madde: Yes, Madde, I have done it; the button on the left now says “Stay.” Clicking it puts you back in the puzzle, where you can now still interact.

While solving puzzles, you might have encountered Unpaired Bases as shown below. You can use strategy 1 or strategy 2 to fold an RNA into target mode. 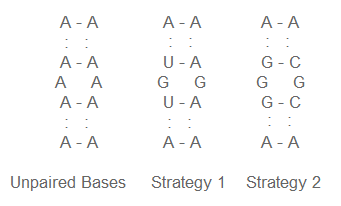 This is a key point, sneh! Many thanks for stating it in such an explicit, focused - and illustrated - manner - This broke me through in several puzzles that were giving me a tough way to go.

This is a very helpful guide, but I feel like by following it I defeat the purpose of the entire program. I could easily program an algorithm to follow exactly this guide and eliminate the human element all together whilest dramatically reducing the amount of time necessary to fold the RNA

In fact, we are planning to study and formalize player strategies to test them against existing algorithms for RNA design. However, mbp21’s awesome strategy does not mean that it’s time for EteRNA to pull up stakes yet! The heart of EteRNA is The Lab, where player designs are scored based on real experimental synthesis and validation. Mbp21’s strategy, as great as it is, will likely not always yield RNAs which synthesize properly. If not, we must hypothesize new criteria for successful synthesis, and develop new strategies which satisfy these criteria. There has never been a game quite like EteRNA before. It’s going to be an exciting ride, and we’re just beginning!

so to clarify, for energy, preffered is closest to 0, or farthest from it,

also felt this would be a place to note my observation, in the solutions that fold closest to native, there energy seems to be in the middle of the found results, -22-34Kj, with the lowest ones being about 2 and greatest near 58

Ryan. The energy situation is somewhat intricate. Energy depends on two things: sequence and conformation (a.k.a. shape). A basic biochemical assumption is that Nature always finds the minimum energy conformation for any sequence. Indeed, because of the relative simple rules of RNA self-assembly, EteRNA automatically solves for the “best” (minimum energy) conformation for any sequence you make. (Or at least, the best conformation given EteRNA’s simple energetics model.) Therefore, just because one sequence has a lower energy in EteRNA (higher negative kJ) doesn’t necessarily mean that it’s better than another sequence with a higher energy, since both conformations are energy minimal with respect to their sequences. One of the things which we’d like to figure out through the lab is if lower energy really is globally better, i.e. more likely to form in nature.

@Madde: Oop, you were correct, Madde, and I was wrong. After clearing (or it may be after session), it does seem to be gone for good, This is a shame, I wish our solutions were cached locally for our study later if we want them; sometimes I wish I could go back and look at a certain puzzle for a certain question I have in mind, and it is more often not right after I complete the puzzle, but much later. Unfortunately, I now see, that later is not an option.

The new tools that became available today are really useful for developing new strategies, or improving upon existing ones.

For example, now it’s easier to fill stacks with either A or U, and then tweak them using the “Pair swapping” brush. This is specially useful in the Brassica napus puzzles, where you can start by changing one of the chain sides to U, and then start swapping them from top to bottom, trying to get as many white areas as possible in the puzzle thumbnail. After that, strategy is the same as in the original post.

Also, when a puzzle requires a lot of G-U pairs, you can try swapping as many A-U pairs as you can without losing the target shape, then replacing A with U.

As Matt Baumgartner mentioned in his excellent tutorial (above), Step 3 (removing as many G-C pairs as possible) “…is generally the hardest part in the more difficult levels.” Matt’s further explanations on HOW to do this are sufficient in themselves to get you well on the way to conquering every single puzzle in EteRNA, regardless of level.

However, as I have progressed in EteRNA puzzle solving skill, I have noted a few little "tips & tricks, " and explanations which may be helpful in certain situations on certain puzzles. I thought it might be helpful to those interested in getting better at EteRNA, if I published them here:

…a) Sometimes it is not the first adjacent Adenine that is the key for substituting with a Guanine in order to eliminate your target Cytosine.

…b) First, it may not be a single adjacent at all, but a pair of adjacents on opposite sides of the stack.

…c) Further, it may even be a triplet or quadruplet of adjacents oddly spaced in one loop or in loops on opposite ends of the stack, so it will help you if you are by nature patient and methodical in discovering these permutations. (This is another time when a binary progression of Guanine placements in the loops, similar to the binary progression of base-pair flips in the stack - will often yield a successful result).

…d) Finally, each permutation of base-pair flips in the stack will affect the results you achieve with “Guanine Hook” placements in the loops, so if one round of “G-Hook” placements fails, you will sometimes find it will still succeed if you try again after a different pair-flip in the stack.

…e) Surprisingly, sometimes “adjacent” Adenine in a loop might be more accuately described as first available Adenine even if not adjacent. This is especially true where multiple stacks meet a large loop right next to one another; the stack-ends seem to have a sort of “pass-through” effect, such that the first available Adenine after two or even three stack ends, can act just as if it was adjacent to the stack you are working on. This odd phenomenon has saved my bacon on multiple occasions.

…where the string of 3 consecutive G’s in Sneh’s “Strategy 2” has been broken up in to two diagonal pairs of G’s instead.

I now find I use this third hexagonal variaton more often than either “Strategy 1” or “Strategy 2” from Sneh’s post above, although, all three find uses regularly.

From G-C to G-U, to U-G, to U-A, to A-U. being sure this way to not miss that one combination that will reward you with sudden multi-colored searchlight beams and Champagne Bubbles! :)…l (that is Champagne, isn’t it?)

I’ve been trying to recall some of the other interesting little things I’ve noted over the past few weeks, (I know there are a few I’m forgetting), but they are just not coming to mind just now. I will add them later if and when they occur to me again.

Wow, Dimension9. This is totally awesome. At some future point in the project, we hope to formalize these strategies as algorithms and then compete them head-to-head with existing algorithms in RNA design.