Is the puzzle maker not working, do the puzzles doesn’t load or are some of the game functions broken? You can report the game problems here.

Feel free to mention your computer’s operating system. Do you use Windows 7, Linux or something else? What browser did the problem occur in? This will help the devs troubleshoot and locate the problem.

The idea for this page started HERE. This page is meant as a help to keep focus on current game and UI issues for both players and devs.

The first problem I will like to report is that the the green mark ticking off marks that shows that we have contributed to an active lab with designing and vote, is not showing up. I have posted 3 design solutions in this lab, and yet the solved mark does not show up as usual. This has been down, since the latest update.

I’d like to make a number of observations about the sequence of clicks it now takes to get from a Past Labs page to browsing the results. I realize that the organizational structure of labs is changing; it’s moving toward allowing labs to be organized into “Projects”, and there is going to need to be changes to reflect that. But there are many things about the current iteration that are pretty awkward, so I might as well mention them now.

Lets start by going to the bottom of the first page of the past labs report and click on “Review Results”. That’s a promising start, because 90% of the time I want to look at a lab, it’s to see results. So here’s what I get. 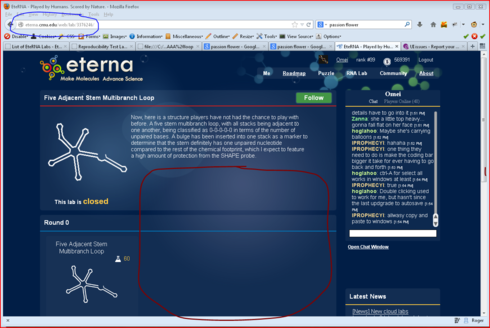 Some things that seem like they could be improved.
* The URL, circled in blue, is misleading. This is not lab 3376426. Under most circumstances, people don’t pay that much attention to the URL. But for running almost any Eterna script, one needs to know the lab ID, and the URL of this page is the standard way of getting it from the UI.
* There is a lot of unused screen space. The UI is getting cumbersome to navigate for a variety of reasons, but a big one is the need for a lot of vertical scrolling. If the screen space were used more parsimoniously, it would help that a lot. (I don’t know if everyone would agree, but I don’t think the graphic target structure needs to take up as much space as it is given now.)
* I got here because I clicked on “Show Results”, but there are no results. In fact, there’s no indication of how to proceed to the results.
* Second to looking for results, the most common thing I would want here is the dot bracket notation for the target structure. But it isn’t on this page, either.
* After some experimentation (or asking in chat), one finds that by moving the cursor over the second target structure, one gets a pop-up button labeled “Show”. That’s what I asked for last time. Why again? And why isn’t the button always visible? Or, if screen space were really that scarce, why not take me immediately to the next page when I clicked on the target, instead of make me click again on the popup “Show”, when there is no other choice?
* When I do click on “Show”, I often get no response. It took me awhile to figure out why. It turns out that while the cursor changes to a hand as soon as the mouse enters the button region, the click handler is on the text. The button itself is very large compared to the text, so most of what seems to be the button isn’t responsive.
* When I do click on “Show”, I still haven’t made much progress. Here’s what I get:

There is even more wasted space now than before. The only new information is the dot bracket notation and the number of synthesized designs.
* Assuming that what I really wanted was to see the results (which is, after all, what the original button said I would get), the button for that isn’t even on the screen. I have to do more vertical scrolling (often a lot) to find it. True, there is a “Review Submitted Designs” button already visible, but that’s not the same as “See all Results”

Once I do get through these steps, I get back to familiar territory, and the URL shows the real lab ID. Whew!

Making an itemized list like this gives the impression that I am really grousing, and that’s not my intent. I just wanted to be as specific as I could, rather than posting a generic comment like “The new lab UI requires too much clicking”.

Here’s what I now get when I bring up the synthesis results for one design. 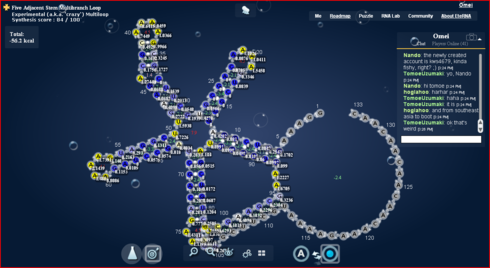 Personally, I don’t think I’ll ever want to see the SHAPE data displayed like this. But that shouldn’t be an issue, because there is a setting in the options to turn it off. The problem is that my choice doesn’t persist. I can go to the options menu and turn it off for this design, but it comes right back for the next design.

Also can we perhaps choose how many digits we get shown? If we want precition we can copy the numbers from Omei’s tool, but for ingame interface, perhaps 2 digits suffice.

FWIW, I’ve come to the conclusion that reporting the SHAPE values with precision past 2 digits is pretty meaningless, unless (maybe) you are comparing averages over a very large number of measurements.

I agree with everything you mentioned, Omei. Especially your wish to get more direct access to the data.

Here is an idea Mat and I have been working on.

What we will like is to be able to call the design info from within the lab design, if we should want it. Not walk through the design entry/info page each time we want to get to the data. As Omei mentioned: “90% of the time we just want to see the data.” 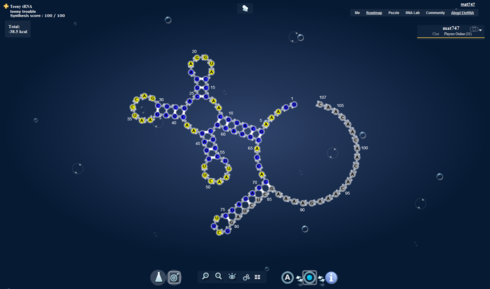 We would like to be able to have a fast track way to get to the lab data. The INFO button could placed else where, eg. in the toolbox. Then a small window with the design description could pop up in a corner of the window, when it was called for. It would also be very practical when submitting designs and one wants to see the Lab makers notes, along with designing.

Not to mention it will save us a lot of time.

The non-persistence of the option is not the only one, low-performance mode also doesn’t persist when viewing labs.

Justin has fixed this issue and it was deployed yesterday. Is it still not working with you?

Thanks for your comments.
So, “low-performance mode” and “show shape data” options are not persist? and do you want to round off the shape data to third decimal place?

Hi Diana! I think the “show shape data” should persist across all the labs, like most, if not all, of the other game options do.

But “low-performance mode” may be a special case. I’ve never used it. It’s there mostly for large puzzles, isn’t it? In which case, people who use it might like it to be a puzzle-by-puzzle setting, if that’s the way it’s been up to now. In any case, I don’t have an opinion.

Thanks for all the responsive action!

Suggestion - Could we have the option of turn off/on the Show raw shape values via Shortcut or Hotkey. I think it would be good if we could switch between different views easier/faster to make both views more accessible.

Low performance mode is important for laptops. I have a recent MacBook pro, and 6 months ago, I forgot a browser tab open on a puzzle. The morning after the harddisk had failed because of the nearby heat generated by 100% CPU load for hours. And I had to rebuild the machine from scratch…

Currently, low performance mode is not even good enough, it should also disable the “jiggling” of the bases.

When I work on a normal workstation, I don’t really care, and the hardware can take it easily. But on my laptop, I really want this “fancy” stuff away, all of it.

The sequences don’t line up in Shape with Error view, when using firefox. (Chrome appears fine.)

Thanks for reporting this issue! I’ll look into it!

Omei - I agree that the options should be persistent. When we tested, sometimes they don’t work properly. We need to figure out why. Anyway, thanks for your opinion!

Re the hot key, I would think toggling it should not change the persistent setting.

Works for me now.

A thought on Projects vs Labs: I’m not sure whether the plan is for all labs to to be part of a some project, even if it is a “stand-alone” lab. But whether or not that is the case, I’m thinking that a UI selection for “labs” (past, waiting, active or proposed), should take you directly to the lab, not it’s parent project. The info page for the lab could have a button for the lab’s project page, which would include all the labs in that project, for the case when a player wants to see other labs in the project. Presumably, there will also be one or more “Projects” menu items under the main menu’s RNA Lab choice, for the case when a player is explicitly looking for a project, as opposed to a specific lab.

… and then, if we could have a second button on any list of labs, something like this:

that would really be cool because then “Review Results” could take us directly to the results. The Lab Info button could take is to the lab’s page.